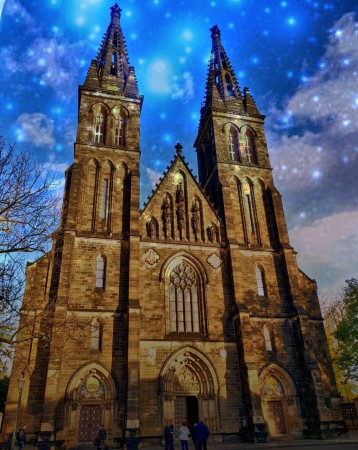 Vyšehrad, the place where priestess Libuše foretold the glory of Prague, is one of the most popular destinations for Prague residents. Its splendid buildings are surrounded by magnificent gardens. During this tour, you will get to know something of Czech mythology, hear the legend about the founding of Prague, gaze at the baroque wall, fortifications and gates, Čertův Sloup (the Devil’s Pillar), Libuše’s Bath, the Old Burgrave’s Residence, the Neo-Gothic Church of Peter and Paul with its murals in Art Nouveau style, Slavín Cemetery, the resting place of many celebrities,  the Romanesque rotunda of St. Martin, statues of famous characters in the parks of Vyšehrad, casemates exhibiting some original statues form Charles Bridge and parts of the old castle.

Did you know: the oldest preserved building in Vyšehrad is St. Martin’s Rotunda, erected at the time of the first crusade to the Holy Land (11th century), possessing walls that are 97 cm thick? And that the oldest bridge in Prague is neither the Judith Bridge nor the Charles Bridge, but the bridge spanning Vyšehrad’s moat (11th century), connecting the Royal Palace with the chapter?

Price:  As specified in the price list (https://www.juvita.cz/en/price-list/) in accordance with hourly rates

ease fill in the following informations: