Homepage > THE OLD TOWN IN A NUTSHELL 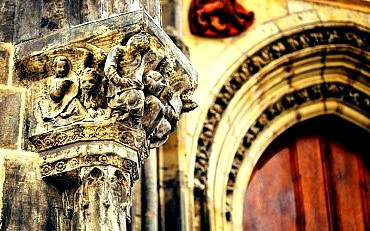 As early as the mid-10th century, the Old Town had been described by an Arabian merchant, Ibrahim ibn Jakub, as a wealthy city built of stone with a thriving slave trade and where cloth strips were accepted currency. This came at a time when other European cities built their buildings from wood and clay. Take a walk through the Old Town Square and the surrounding winding streets and learn about the symbolism and hidden meaning of the Astronomical Clock.

Price:  As specified in the price list (www.juvita.cz/en/price-list/) in accordance with hourly rates

Did you know: the most valuable part of Prague’s Astronomical Clock is not the famed procession of Twelve Apostles, but rather the “Sphere”, or clock dial, which indicates ongoing astronomical phenomena, and at the time it was built in the Middle Ages, was an unbelievable feat of mechanical engineering?