Homepage > STARRY NIGHT IN PRAGUE: THE CITY OF MYTHS AND LEGENDS 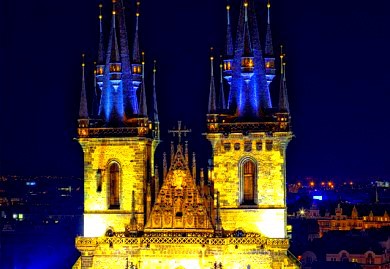 Experience the glimmer of this magical city beneath the night sky as light from splendid buildings, towers and castles, like stars of the earth, is spectacularly reflected upon the surface of the river...

Legendary founder of the Czech ruling dynasty, Libuše, foretold the emergence of a city, the glory of which would touch the stars. Naturally, that city was Prague! The site where, in accordance with Libuše’s prophecy Prague was later built, was also the location of an immense and ancient crater left by a fallen meteor, whereby some of the most unique gemstones in the world were created (considered by some to be the stone from Lucifer’s diadem, dislodged during his fall from heaven, from which, later, the Holy Grail was fashioned). Experience the starry city entirely differently than the average tourist!

Did you know: in the deep pool beneath the rock of Vyšehrad, the fabled golden cradle of Princess Libuše, legendary founder of the Přemyslid dynasty, is hidden? And that it is the very one which surfaced upon the waters of the Vltava at the birth of Charles IV, grew with him, eventually becoming a bed for the ripened ruler, and after his death, once again returned to the shape of a cradle and passed back into the waters of the river at exactly the same place? Or that F.A.R. Chateaubriand spoke of Bohemia as the “land of sorcerers”?

Treat yourself to an unforgettable experience: discover what makes Prague one of the most visited cities in the world.

Price:  As specified in the price-list in accordance with hourly rates