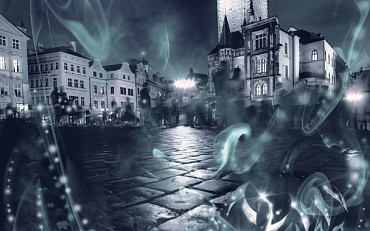 You will feel intoxicated by the irresistible charm of Prague Castle at night and experience the spirit of Hradčany, the Lesser Town and the Old Town, awakened by the darkness...

Prague has long been known for its legends and enigmatic myths that fuse a synergy of historical facts, dark stories of the occult, romantic fables, mysteries, mages, alchemists, mystics, occultists, astronomers, astrologists and secret societies, the members of which were often from ruling families. As darkness falls, all manner of creatures banished from the world of humans, cowering in the shadows of winding alleyways along with other hidden aspects of the city, emerge from their darkened corners of centuries-old buildings. Prague, its every stones saturated with inexplicable magic and unsolvable mysteries, draws you into its seductive web. Not only will you glimpse the guardian angels of the “Golden City”, but also traces of the angels of darkness, as well as the place where, every midnight, one of the nine Gates of Hell swings wide. Experience the vibrating intensity of energy vortices at the Castle and throughout the Old Town, take a peek at the secrets of Charles Bridge and perhaps even meet a procession of ghosts in one of the many narrow passages of the city center. You will come across the gate to the underground that inspired Terry Pratchett during the writing of his hilarious and unsurpassable fantasy book series about Discworld, and more specifically about the mysterious city of Ankh Morpork with its Unseen University for wizards (in its own way reminiscent of the alchemy and esotericism of Prague, always brimming with mages, mystics and seekers of gates to other worlds and dimensions who hailed from every land imaginable.

Did you know: legend has it that when the beautiful Jewish Hannina threw herself into the Vltava to follow her lover, she discovered that he was in reality a water sprite looking for a girl to live with him in his underwater kingdom? Or that the coal she received as a gift from the midwife who had brought her child into the world turned to gold on the banks of the river?

Price:  As specified in the price-list in accordance with hourly rates