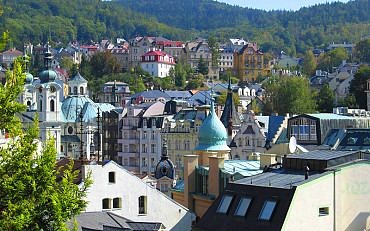 Delight in the pompous beauty of this spa town, unique in the sheer number of hot springs, and treat yourself to the stylish spas of Karlovy Vary...

The annual opening of the spa season, a sought after socio-cultural event not only attracting Czech government officials but also diplomats of many other countries and representatives of partner cities among other important guests, testifies to the fact that Karlovy Vary (Carlsbad) boasts the most acclaimed spas in Czech Republic. In addition, since being established in the 14thcentury by Charles IV, thousands of famous people have come here for its healing properties (among them Marie Terezie, Petr Veliký, Nikolo Paganini, Fryderik Chopin, Richard Wagner, Ludwig van Beethoven, Antonín Dvořák, Johann Sebastian Bach, Friedrich Schiller, Johann Wolfgang Goethe, Nikolaj Vasiljevič Gogol, Ivan Sergejevič Turgeněv, Heinrich Schliemann, Sigmund Freud, Theodor Fontane, Karel Marx, Franz Kafka, Karel Čapek etc). During the tour you will be able to examine the Imperial Spa, the grandiose Grandhotel Pupp, the Karlovy Vary Town Theater, Diana Observation Tower, the Lookout of Charles IV, Goethe’s Lookout, stroll through the Orchard, Mill, Market, Castle and Hot Springs Colonnades, see the Old Meadow, visit the world famous Moser glassworks, from whose goblets more than one head of state has drunk, pop in at the Jan Becher museum (the acclaimed Becherovka is considered to be the thirteenth spring of Karlovy Vary and many a celebrity has enjoyed a glass of this miraculous elixir), admire the Church of St. Mary Magdalene with its singular underground chapel, the Main Post Office, the exquisite Orthodox church of Saints Peter and Paul in the residential district of Westend. You can taste healing water, bubbling up from 2000 m underground, in the public springs.  You can purchase interesting commodities in stylish boutiques, bring home some Karlovy Vary spa wafers or stone roses as a souvenir or lounge in the café of the Pupp hotel, sipping excellent coffee and savoring the popular Pupp cake.

Starting Location: at your hotel

Ending Point: at your hotel

Price:  As specified in the price list (https://www.juvita.cz/en/price-list/) in accordance with hourly rates

Did you know: during the annual Karlovy Vary International Film Festival, the biggest in central and eastern Europe (established in 1947 just one year after the festival in Cannes), the city has been visited by such big names of cinematography as Bernardo Bertolucci, Miloš Forman, Robert de Niro, Robert Redford, Leonardo DiCaprio, Gina Lollobrigida, Mia Farrow, Gregory Peck, Whoopi Goldberg, Salma Hayek, Peter Fonda, Sharon Stone, Michael Douglas, Woody Harrelson, Keira Knigtley, Morgan Freeman, Elijah Wood, Renée Zellweger, Antonio Banderas, Jude Law and others? And not only was this the site of the first ever film projection in the Czech Republic (in 1896), but also a site where movies have been filmed, for instance Casino Royale, Shanghai Knights or Last Holiday?